The Guild of the Infant Saviour is not just a great title for a luminous story, it was a real place that is now lost. The Guild was the unwed mothers’ home in New York City where Megan Culhane Galbraith’s mother, Ursula, gave birth to her and surrendered her to Catholic Charities. The building still exists, but its purpose has morphed from charity hospital to Hungarian consulate. Loss and metamorphosis are twin satellites of Galbraith’s debut memoir, a world of vulnerable personal history and exquisitely detailed research. Her chapters are bespoke essays themselves, connected across a non-linear timeline and warp-jumping genres by an umbilical we all intimately recognize. She lets us float in the space of her prose while also tugging at us to come closer. It’s a poignant, hopeful, embodied sensation we feel in our core.

I know Megan. We met when I was a returning student in technical communication at Rensselaer Polytechnic Institute in Troy, NY. She was the acting director of the Institute’s media relations department. We were the same age, but she was this sophisticated and accomplished adult working in science journalism while I was a baby bird, still fuzzy and flightless. I was a bit in awe, honestly; not only was she a consummate writer and editor, she was curious and well-read and funny as hell. I wanted to work for her in any way possible so I could learn from her. I “interned” in the media relations department (mostly I was just underfoot, writing some tidbits for the staff newsletter) and we became friends.

It wasn’t until I read The Guild of the Infant Saviour that I realized when I had first met her all those years ago, she had just embarked on the journey to find and know her birth mother. It’s how she travels that promising and perilous landscape that makes her memoir so glorious. Scaffolded by her technical expertise as a science writer, the book shares marvelous treats like the unsettling mystery of the Domestic Economics babies at Cornell University and the fascinating history of pornographic pocket watches. Nestled within these journalistic chapters are confessions, laments, and protests of a loving and beloved daughter, mother, wife, and friend researching all the confounding characteristics of attachment and belonging. At the end of the book I realized how the research and the search intertwined inextricably, every page was infused with the most human of questions; every sentence beneficently haunted by: Who am I? Where do I come from? Where to now? 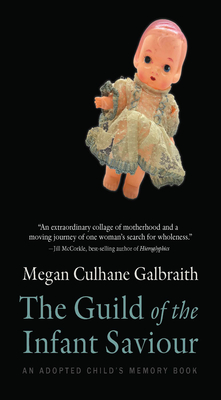 I hadn’t been given dolls to play with as a child—no Barbie, or Baby Alive. I had no doll to feed, nor did I ever change a doll’s diaper. Yet here I was a grown woman (a feminist!) besotted with these booby, leggy, plastic dolls. I was also in love with the tiny, delicate baby dolls. They too were made from plastic, although they were fragile as eggshells and the size of a three-month-old fetus. I collected them with obsessive zeal.

The dollhouse became a visual art project called The Dollhouse. I staged the Cuties and babies in household situations and photographed them from the outside looking in. I realized it was a voyeuristic way of seeing a situation from an angle of removal. It gave me the space I needed to examine my adopted life through a different lens. It emphasized a dystopia perhaps that was right there before my eyes.

I’d been the subject of many photographs—my dad being the photographer—but now, playing with these dolls, I realized I’d also been an object: a doll. Behind the lens of my camera, I am the director of my narrative. I’ve reclaimed a sense of control. Play calmed me down, allowed me to turn off my brain, and when I did, thoughts flooded in; memories returned. I became curiouser and curiouser. I began to ask uncomfortable questions. A window opened to a new way of seeing my reality.

Ursula and I have now known each other for nearly twenty-five years, and after hearing her tell me stories—shot through her lens of memory, grief, and trauma—I realize we have more in common than just the circumstance of my birth: we had both disappeared into our fantasies. Mine was tiny, imaginary, and voluntary; hers was all too real.

We’d both been pregnant with shame.

“No one gets a dollhouse to play at reality,” said the child psychologist Erik Erickson, “but reality seeps in everywhere when we play.”

As an adult, I see myself in early photographs and can identify the feeling of being fragile, helpless, and adrift. Like many adoptees, I’ve moved through depression, suicidal ideation, an eating disorder, anxiety, and sexual acting out. I’ve identified gashes of grief and shame: wounds I’d been licking instead of healing.

Adoption is what author Nancy Verrier called “the primal wound,” and the resulting feelings of abandonment, shame, and loss are due to the severed connection between birth mother and child when a baby is taken away.

“Children are innocent before they are corrupted by adults,” said Erickson, “although we know some of them are not and those children—the ones capable of arranging and rearranging the furniture and dolls in any dollhouse—are the most dangerous of all. Power and innocence together are explosive.”

I realize now that I don’t need to apologize for my existence.

The Dollhouse became a lens through which I could see my birth mother and myself. I could safely question my personal history and interrogate the myths of adoption, identity, feminism, and home. As an adopted child, I’d felt like a thing to be played with instead of a person with her own identity. I’d felt looked at, but not seen. I liked the idea of reclaiming what home meant to me by playing in my dollhouse because I’d never felt truly at home anywhere, not even in my own body.

Play helped me unlock ways of expressing the paradox of my identity as an adoptee while exploring intergenerational trauma, erasure, abandonment, and the myths and family lore that factor into many adoptees’ origin stories. The Dollhouse photos in this book are recreating the original photos I curated from my Adopted Child’s Memory Book, among other places. The original photos—like artifacts—appear at the end of each essay.

In The Dollhouse I created a world where women rule on a 1:12-scale: a portal to imagine myself into my birth mother’s life and her into mine.

Our stories are fractured.

Our narratives double back on themselves like an Ouroboros swallowing its tail.

Megan Galbraith is a writer and visual artist. Her work was a Notable Mention in Best American Essays 2017 and has been published in Tupelo Quarterly, Redivider, Catapult, Hobart, Longreads, and Hotel Amerika, among others. She is associate director of the Bennington Writing Seminars and the founding director of the Governor’s Institutes of Vermont Young Writers Institute.

One thought on “Soul-searching and Self-soothing: An Excerpt from Megan Culhane Galbraith’s memoir, The Guild of the Infant Saviour”