As a reader, writer, and reviewer, it’s always a joy to find and share a fresh voice. I was delighted to discover Maisy Card’s debut novel, These Ghosts Are Family, which I reviewed when it came out last year. Frothy and humorous, the novel also takes a deep dive into the heartache that only loved ones can deliver. Card creates multiple generations so complex and fractured that the family tree included at the beginning of the novel is a necessary guide. Presented in condensed, intense versions of themselves, family members in These Ghosts Are Family are maddening and lovable—often at the same time.

As a lifelong library fan, I was excited to learn that Card is a librarian. Not only has she surrounded herself with books, making it her profession to share them with the public, but she has now added her own work to library shelves.

I was fortunate to catch up with Maisy Card by email.

Martha Anne Toll: You’ve spoken frequently about your family, and your book reflects much of that experience. For readers who have not yet had the pleasure of reading your book, can you say more about that?

Maisy Card: I began writing the book as short stories inspired by early memories and family stories. It didn’t occur to me to connect them until my grandfather started showing signs of dementia. He was a very quiet and secretive man. I remember always trying to figure out what was going on in his head, even when I was really young.  I thought about all the questions I’d 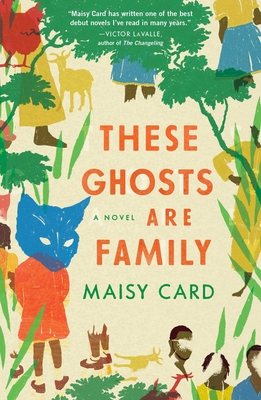 had that would never have answers, and all the things his children probably wanted to say to him but never knew how. Now it was too late. To fill that void, to figure out that unknown, I created a fictional family. I had the novel revolve around the actions of the family patriarch. These Ghosts Are Family follows a Jamaican family—the fictional Paisleys—across generations and looks at the impact of family secrets.

MAT: Can you talk about your twin experiences in New York and Jamaica and how they inform your writing?

MC: I was born in Jamaica but moved to New York when I was five. The more distant I became from Jamaica, the more fascinated I became by it. There were a ton of Caribbean people when I was growing up in New York. We never learned that history in school, even though America’s imperialism and interference in the government and economy of our countries very much impacted the trajectory of our lives. What you see of Caribbean people in mainstream media is often fantasy. This created cognitive dissonance, to see yourself everywhere but still recognize that you’re invisible. In college, I realized I had to center myself and people like me in my writing because I didn’t know who else would.

MAT: It must be difficult to manage so many generations and time periods in one novel. Can you talk about some of those challenges?

MC: I wrote without keeping track of dates or characters. It wasn’t an organized process. The book kept changing and evolving over time. Toward the end of the process my agent suggested I create a family tree. That became essential during the editing process for figuring out if the dates and relationships lined up. Both my editor and I had to do a lot of math in the end.

MAT: How did your family react to your book?

MC: My family has been very supportive. I don’t think my parents and aunts and uncles knew I was writing a novel, so it was a nice surprise when I showed them. My parents haven’t read the book, and I’m fine with that. They’ve mailed copies to a ton of people. They have something to brag about and they’re happy.

MAT: How did you come to writing?

MC: I decided to become a writer in 10th grade. My teacher assigned us the story “Everything That Rises Must Converge” by Flannery O’Connor. We had to choose a character that didn’t speak in the original story and rewrite it from their point of view. I’d never felt so invested in an assignment before. I’ve wanted to be a writer ever since.

MAT: You’re a librarian (I’m a total library fan girl). How did you choose that as a career and how has it informed your writing?

MC: I didn’t become a librarian until my early thirties. After I finished my MFA in Fiction, I was surprised that nothing in my life had changed. I went back to doing the same job I was doing prior to entering the program, which was working in fundraising and development for nonprofits. Same position as before, same salary. I was still unpublished. The job was fine; I just wasn’t happy doing administrative work. I wanted more interaction with people. I knew I could teach composition as an adjunct, but I wouldn’t make enough to pay my rent and the debt that I’d accrued from undergrad and grad school.  I thought about getting a professional degree and it just kind of hit me that I should become a librarian. I wanted to do more direct service, not just behind the scenes work. I wanted to work with people. I’d tutored and taught high school kids while getting my MFA, and I realized I really loved working with that demographic. I also wanted to talk about books.

Being a librarian is very social. You get to know people in your community. You work with people from every socioeconomic class. You hear a lot of stories. You overhear a lot of conversations, which is great for writing richer characters. There are so many institutions and places in society that are segregated in one way or another—by race, class, political beliefs, etc. The library is a nice break from that.

MAT: What have you learned from your library patrons?

MC: Patience and understanding. Everyone’s got a story.

MAT: Bloom supports and features writers who publish their first work when they are older. What has it felt like for you?

MC: When I entered the MFA program, I thought I’d finish a book in my twenties. As a result, I was disappointed in myself for a long time. When I did finish my book I was so glad that I took my time. I’m such a different writer now than I was in my early twenties.  My life experience has impacted the work I produce. I think I would have regretted publishing the version of the book I had back then.

MC: I’d been working on this book for such a long time, eleven years at the point when I met my agent. I got really lucky. The book wasn’t finished, so we made a plan and she gave me deadlines and the push I needed to finally get it done. I think it took under a year to finish it and send it out, and we heard back from publishers fairly quickly. I did add a lot after the book sold and was in the editing process—an additional 30,000 words.

MAT: What writers do you admire and what writers have influenced your work?

MAT: What advice do you have for debut fiction writers?

MC: Don’t go into debt! Also, find a writing group and other ways to hold yourself accountable.

MAT: It’s hard to avoid asking about the pandemic. What has it been like for you and your writing and library work?

MC: It’s been difficult to concentrate. Last year, like most people, I was in a constant state of fear, grief, and anxiety, so writing wasn’t at the forefront of my mind. But still, I was glad it was there and that I had deadlines that at times forced me to take my mind off everything that was going on around me. I also don’t like writing at home. It’s not where I’m the most productive, so that was something I had to get used to.  When I went back to library work, it felt really bizarre working in an empty library with no patrons. I actually took time off to work on my next book, but am returning to full-time work soon.

MAT: What writing/publishing projects are you working on now?

MC: I’m working on a second novel. One of the characters from These Ghosts Are Family is in it as well, but that’s all I can really say for now.

Martha Anne Toll’s debut novel, Three Muses, is forthcoming in 2022 from Regal House Publishing. Her books reviews, essays, and short fiction can be found at NPR Books, Washington Post, The Millions, and elsewhere.