Above my head danced images of winged, haloed saints. A pelican pecked at her breast, feeding blood droplets to her young brood. Golden angels holding jewelled crowns leapt from the roof arches and beams, patterned in blue, green and red, and dotted in gold leaf. Finding a leaflet on a pew, I read that it was a vicar’s wife who had created the splendid medieval fresco that arched above me. In the 1850s, the leaflet explained, the artist had stood, and latterly lay on her back due to crippling arthritis, for six years to create this vision of beauty. She painted it all herself.

I was amazed. What had driven the woman up the ladder? The ceiling fresco was no casual undertaking. What had sustained her over those long years? Wives of the Victorian era were expected to remain primarily within the home, providing emotional and practical support to their husbands who would engage with the outside world. The role for a vicar’s wife was even more rigidly prescribed. Dispensing tea and sympathy to the sick and needy would be the extent of her role. But Mildred Holland, the wife of the Rector of St Mary’s Church William Holland, had defied these expectations. She had broken out. I had to know more about her.

Trawling through the archives at the British Library, I found records from the parish records of Huntingfield. They listed details of expenditure on various church necessities from 1490 onwards. But it was the memoir at the front of the book, written by William’s second wife, Mrs. Elizabeth McKee, which proved most illuminating;for it detailed how the young couple, Mildred and William, while waiting for the incumbent Rector of the parish Mr. Uhthoff to vacate the place, had spent eight years visiting countries such as France, Spain, Germany, Norway and Turkey. Mrs. McKee wrote that while William indulged his interest in church architecture, Mildred had made sketches of what they saw. And, Mrs McKee wrote, she was a good artist.

This talented woman had certainly not let her experiences go to waste. Somehow she persuaded William that despite being a frail woman, she could create and paint an angel ceiling in the parish church. It took her some years. They arrived in 1848, and she did not start painting until 1859 when she was in her mid-forties. Not only that, Mildred got William to pay for the renovation, all but £400. What a woman.

My research had yielded facts and figures. I understood what Mildred had achieved: who advised her, the costs of materials, gold,and fixing the carved angels to the roof and so on. I visited the church many times and could see with my own eyes her triumph. But it still wasn’t clear why she took on this Herculean task. Why had she fought to overcome the many obstacles that must have blocked her way? Fears for safety, questions about her sanity, resistance to her challenge of social expectations and convention, dismay from friends; all so she could paint an angel ceiling?

The inability to answer that question changed my life. I decided to write a novel, to create the story of Huntingfield’s heroine. I wanted to understand for myself what must have happened to cause her to ascend that ladder, given her background, the era, and all the reasons why it would have seemed impossible. I would develop a psychological picture of a woman who could be this brave and determined. I would create a portrait of a marriage that would sustain and support her obsession. I would answer the question for myself. Perhaps I fell in love with Mildred. 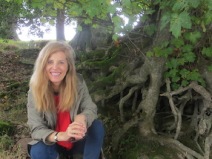 I took two terms of creative writing classes. As I completed the homework tasks set, I began to sketch out ideas for structure and characterisation. I attended a weekend novel writing course. The main message was: “Develop a thick skin and will of steel if you want to write a book.” I began to write scenes. I read widely, I went to live in Huntingfield to absorb the village atmosphere. I interviewed people who were also interested in Mildred and her work, which history has ignored. On the days I was not at my paid office job, I sat at my desk and wrote.

As anyone who has done this knows, there are days when things don’t work well, when the negative voices that mutter “the world does not need another novel” or “what are you doing, thinking you can write?” drown out the positive ones. But, inspired by Mildred, I continued: images of her in the cold Suffolk church, lying on her back spurred me on. Eighteen months later, the first draft of The Huntingfield Paintress lay on the desk. I found an agent who loved the book and, a year later, in 2016, a publisher.

The Huntingfield Paintress has found a wide and passionate readership. I’m asked to festivals and literary events to talk about the woman and the book and how it all happened. There’s no doubt in my mind that Mildred inspired me.

Now I’ve written another novel, inspired by events closer to home. Wyld Dreamers is loosely based on the years I spent living as a hippy on a Somerset farm in the 1970s. The characters are fictitious, but at least some of the action draws on what happened there. The dancing and delirium of youth, for example. But in the main, it’s the place, Somerset, that inspired me: the county’s cathedral-dark sunken lanes, damp with spongy moss in winter, rich with wild strawberries in summer; the big bald hills skirted by dry stone walls topped with beech trees planted by the Victorians; sentry-straight that trees provide shelter from the cutting winds, and their roots, which interlace to form impenetrable barriers against wandering sheep; the view over the Bristol Channel, a thin line of dusty blue that draws the eye deliciously towards South Wales.

This paragraph is taken from Wyld Dreamers.

Falling in love with a person is one thing, but falling in love with a place, what does that mean? There is no body to moon over, no mouth to crave kisses from, no person to communicate with. The exhilaration and euphoria which invades a person in love is absent from the love of place. But that strong sense that ‘this is right’, that ‘this is as it should be’; this is the feeling when the place that resides within, which lifts the spirit without, is cherished.’

Writing the book also gave time for reflection. My mother died when I was sixteen, a few years before I moved to Somerset with my gang of university graduate friends, and though I didn’t realise it at the time, I was still in mourning.  Looking back, I realise that being with Nature – digging a vegetable garden, learning how to milk the house cow, baking bread and brewing beer – was therapeutic and helped me to recover. I still do some of those things today in London. Escaping writing to pick runner beans is a brilliant way to refresh and reboot. One of the characters in Wyld Dreamers loses her mother, and I draw on my experiences to create Amy’s story. The inability of her friends to offer emotional support, her feelings of guilt (that somehow she is to blame for her mother’s death) her seeking of solace in quiet green places—all this came from my experience.

I’ve always written and told stories. Playing songs on the guitar, telling tales to the girls at boarding school, writing for magazines and newspapers—words and writing have been part of my life in one way or another. I’d secretly longed to write a novel but never thought it would happen. Making a living, finding somewhere to live and love, having a family—these took priority for many years. Then our boys left for university. Now there was time in my life for something else. I didn’t know what that would be until a friend suggested I call in at a little Suffolk church on the drive back to London. I walked in the door of St Mary’s Church and my life changed forever.

Pamela Holmes was born in Charleston, South Carolina. At the age of eight, she moved with her family to England. She studied nursing at London University and became a health journalist and on-screen reporter. She now works and volunteers to improve the lives of older people including those with dementia, and she sings in a rock band.  The Huntingfield Paintress was her first novel followed by Wyld Dreamers. She won the Jane Austen Short Story Award in 2014 and her entry for the HISSAC short story competition 2015 was Highly Commended. Pamela is the mother of two boys and lives in London with her husband.

One thought on “Time for Something Else”