Emily Sun and I met cute in a library: she saw my novel, Famous Adopted People, on the shelf of her local library in Perth, Western Australia, thought it was non-fiction, and grabbed it for a friend who had an adopted child. After reading it, she contacted me for an interview for her website.

Kindred spirits, we have kept in contact since then, and I was delighted to hear that her debut collection of poetry, Vociferate|詠, was being published by Australia’s Fremantle Press. As I delved into the poems, my delight turned into wonder and admiration. Through the course of 72 poems, Sun roams the earth, and the cosmos, speaking in idioms both hyper-local and global. She touches upon obscure and internationally recognized cultural references, wielding form with as much precision and beauty as language. Her nimble mind combs the strands of disparate cultures and competing histories, then weaves them together into a shimmering tapestry of our divided past and collective future.

Alice Stephens: When I first met you three years ago, I was under the impression you viewed yourself more as a prose writer than a poet. Can you tell me how your debut publication is this gorgeous, thought-provoking, culture-hopping, intersectional collection of poems?

Emily Sun: I’m so glad that you enjoyed reading my collection, and yes, it is true that when we met, I was writing prose, and it was prose that got me into writing programs that enabled me to complete Vociferate|詠. When I found myself at a place called The Centre for Stories, which supports “diverse” writers, I felt empowered to write about anything I wanted to write about. It was liberating to be amongst mostly younger writers, where I didn’t feel that the only story people wanted to hear from me was the racial-trauma story. It was a relief not to have to practice self-reflexivity, something I always do either on a conscious or subconscious level whenever I leave my home and enter public spaces.

AS: What I think I hear you saying is that poetry allows you a freedom to be you in a way that prose doesn’t. Whom do you consider your literary ancestors?

ES: My literary diet was very British until my 20s. I was born in Hong Kong, my father was brought up in the British colonial system, and I started school in the UK before moving to Australia, which is still very much the child of “Mother England,” with the Queen as our head of state. There was no war of independence here!

When I came to Australia, I was introduced to the “Australian classics,” which include the works of Banjo Patterson — who wrote “Waltzing Matilda,” probably the most well-known Australian poem — and Dorothy McKellar, author of “My Country,” which was also turned into a catchy tune. In fact, a lot of the poems I remember from school were set to song. Although I enjoyed the sounds and melodies, I didn’t really connect with the subject matter. 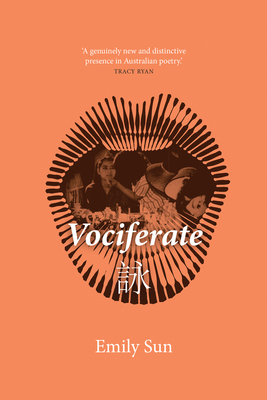 It wasn’t until I was in my 20s that I discovered books written in English by Asian diasporic writers. There were the big names of “international literature,” such as Kazuo Ishiguro and Salman Rushdie, and, of course, Amy Tan, whointroduced me to the world of Asian American literature and the idea that an Asian woman could write as herself without masking her ethnic and cultural background.

I was introduced to Asian American poetry much later when I had the opportunity to hear Marilyn Chin perform in Hong Kong, and that experience opened a whole new world to me. As you know too well, there is that double bind of being an Asian slash [insert one of the Five Eyes nations here] writer where you want to write about the Asian diasporic experience without falling into or reinforcing tropes. I suppose I am drawn to poetry because the form allows for the expressions that are beyond conventional prose.

This is my verbose way of saying that I have many literary ancestors, including ones who might be turning in their graves knowing that there are Chinese people calling themselves Australian and that there is an emerging “Asian Australian” identity!

AS: The collection starts with “Beginning …” continues to “… Wandering …” and ends with “… Continuing …” Can it be read as an identity memoir in poems?

ES: It is a collection about the things that have shaped my world leading up to my 40s, so when read as a whole, the collection is also a meditation on personal and political identities, and how provisional they can be. I suppose as someone who is part of the Chinese diaspora and migrated twice before the age of eight, I have always had that awareness of “flexible citizenships.” And, of course, the older you get, the more identities you accumulate.

AS: I have the luxury of knowing a little of your biography, and that you are a cancer survivor. Several of the poems seem to address this time in your life; was that event the catalyst for your writing?

ES: Yes and no. I was already writing and had a few short publications before I was diagnosed with a late-stage blood cancer. I found out I was sick on the eve of flying to Hong Kong to attend Asia’s first MFA creative part-time residency workshop, the brainchild of Hong Kong writer Xu Xi. I. would have had the opportunity to work with writers such as Madeleine Thien and Marilyn Chin! Sadly, it was not meant to be. It’s possible that my writing would be quite different if my life had taken that trajectory. Who knows? Maybe I would have been published before 40!

When I emailed Xu Xi to withdraw from the program, she encouraged me to keep writing. I remember telling her that I probably would not write again because, at the time, the last thing I needed was to have a creative mind. To survive cancer so many times, you need to limit your ability to imagine any outcome other than the one where you live happily ever after.

I haven’t explicitly addressed my cancer journey in this collection because I’m simply not ready to do that yet. I tried a few years ago to somehow fictionalize it, but I had to abandon the project because it was too traumatic. When I’m ready, I will return to that project.

AS: Does the Chinese character of the title mean vociferate? Why did you choose a bilingual title?

ES: 詠 is my birth name and it means to sing, chant, or hum poetry, which is how poems were recited in ancient China. Vociferate, on the other hand, means to protest, to shout loudly and vehemently. When I realized that the collection would be semi-autobiographical, I considered calling it 詠 but changed my mind because the poems are mostly in English, and I doubted whether any publisher would have taken on a Chinese-only title.

AS: Your poems are in English but frequently feature Chinese characters which are to be read as Mandarin, Cantonese, or Japanese, as well as pinyin, romaji, several Romance languages, and even musical notation and emoticons. I’ve seen you describe this as “translanguaging.” Please talk more about that.

ES: Translanguaging is a term used by education researchers that was first coined by Cem Williams in the 1980s when Gaelic was being introduced into Welsh schools. In short, translanguaging takes into account all of a student’s linguistic capabilities and rejects the idea of a pure language. So in a classroom situation, students are encouraged to discuss their ideas in whichever mode they feel comfortable in even if the output might not be in the institutionally sanctioned language.

I can hold basic conversations in Cantonese and Mandarin and can write basic Chinese on digital devices thanks to the pinyin input system. I’ve acquired other languages and dialects both formally (in the classroom) and informally (through my travels), but English is the only language I’m fully literate in. I allowed myself to write without compartmentalizing the Chinese from the English, the Cantonese from the Mandarin, and let the sounds from other places dance and mix into the poems. It was fun, freeing, and so rewarding.

AS: Form is almost as important as content in your poems, which is to say that you are not content to let the words lie on the page but lay them in very intentional and inventive ways. You also use (or don’t use) punctuation to the same textural effect. Is the formatting process as integral to the work as the words? Which comes first?

ES: I’ve been asked this question many times and it’s always difficult to answer. I’m an organic writer who goes by instinct rather than structure. I spent most of my childhood playing music so perhaps it’s almost as if I’m scoring a poem. It all begins with sounds and the idea, and sometimes the visual aspect is evident from the beginning. I have put a lot of thought into the layout in every poem and hopefully I’ve managed to convey what I intended to convey. But the joy of reading poetry is that the reader gets to play an active role in the meaning-making process.

AS: There are many references to cinema, especially Hong Kong films, but also Hollywood and Australian, and it occurred to me that film is another language, a more universal one than literature. There are also nods to cultural touchstones from Momotarō to Morticia Addams, as well as proverbs, jingoisms, and phrases that certain diasporic communities across the world would recognize. How is your work classified, and does it correspond with how you think it should be classified?

ES: I doubt that my book would have been published by an Australian publisher 15 years ago because, at that stage, publishers might not have known how to position the book. I’m not really sure how the book will be classified by people as it’s just been released. Poetry is not as heavily marketed as fiction so it can be simply classified as poetry.

AS: What is next for Emily Sun?

ES: I’m currently pursuing my PhD in creative writing for which I am working on a story inspired by the murder of Emily Sun Lock, the wife of a Chinese market gardener, who emigrated from England to Western Australia in the late 19th Century.

I’ve also been working on a second poetry collection. Watch this space!