Mari Coates grew up with the art of Agnes Pelton in her home. Her family

owned some of Pelton’s portraits. But Coates was not aware that late in Pelton’s life, after much searching and trial and error, Pelton began to paint abstract art. When Coates attended an exhibition that included these later Pelton paintings, she was awestruck–and  knew immediately that she wanted to write about Pelton. With little biographical information available, Coates began a novel, which is now earning wonderful reviews from places such as Kirkus Reviews and Publishers Weekly. The novel has also earned kudos from Margot Livesey, Joan Silber, Jim Shepard, Andrea Barrett, and more. An excerpt from The Pelton Papers, due out April 7th from She Writes Press, follows. For those interested in Agnes Pelton’s art, a show opens in March at The Whitney and will travel from there to Palm Springs, California.

From “The Pelton Papers,” a novel by Mari Coates, She Writes Press, April 2020. 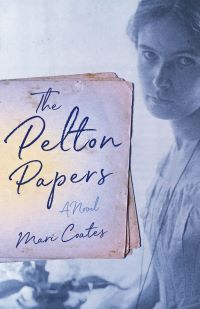 [It is 1910. Agnes has been sent to Rome to recuperate from a long bout of depression and to recover her ability to make art. ]

At the British Academy, I joined the life drawing class. At first it was shocking to be in a figure drawing class with women and men, all of us making charcoal drawings of the same nude model. It certainly made a change from Brooklyn. So odd to see women behind easels set right next to those of the men, all of us staring dispassionately at the woman posing in the center. There was no talking, which suited me fine. Soon, along with everyone else in the room, I became entirely absorbed in the marvelous intricacies of the human form. It seemed a revelation to me the subtle ways that the human spirit could make itself evident within that form. A smooth curve of the model’s back became a graceful arc that seemed to me an expression of strength. A face that might appear impassive on the model as she posed revealed implications of sadness, joy, and intelligence.

In a scene that uncannily recalled to me my first day at Pratt, the big studio doors broke open, and in strode Hamilton Easter Field, as handsome in his Bohemian way as I remembered—dark, mustachioed, and fired with passion. He did not lecture but began making his way around the cavernous room, greeting students he knew, introducing himself to those he hadn’t yet met. All activity came to a stop, and even the model relaxed and pulled a robe around herself. Mr. Field was in no hurry; he paused to discuss each student’s work in low tones, breaking into laughter here and there as he encountered an old friend.

I stood a bit stiffly. I might not have been the oldest student—one of the men had thinning gray hair—but I was likely the oldest of the women. Suddenly I felt exposed, thrust into view. From being one of the youngest at Pratt to this; I wondered how I could have permitted illness and despair to gain the upper hand such that years could go by without my really noticing.

I knew I was out of practice. I had a short, impromptu speech prepared about how hard I would work to catch up, but when Field found his way to where I was working, he held a hand up to silence me. He put all his attention on my drawing. I had laid my paper on a table rather than up on an easel—it is easier to control the line when it’s flat—and he loomed over it. I was shocked at his size. I had not remembered that about him. From a distance he had not appeared imposing but standing next to me he seemed to fill his space and my space and the space around us as well. Finally he raised his head—large, square, almost leonine—and pointed to the line of leg, which I had extended in one gesture from the ankle, past the knee, around the thigh and the buttock, letting it thicken slightly as it described the model’s back. I felt certain he was about to criticize my effort as not refining the figure carefully enough and tried once more to explain that I was relearning drawing and trying to rediscover my line. Again, he waved my explanation away, and his face broke into a beatific smile.

“This—” he pointed to the line that worried me. “—is lovely.”

I was flustered and surprised and could not help but return his smile.

“You look familiar. Have we met?”

“Years ago, Mr. Field. You taught me painting at Pratt.”

“Ah, yes! A fellow Brooklynite! How is that sweet old place?”

“Now I remember. I believe that Arthur Dow wrote to me about you.”

“Yes, I believe he very kindly did.”

Of course, I understood that my years of training had not been completely forgotten. In my heart, though, I feared that the listless efforts of the recent years along with my obsession for Gertrude (for that, I realized at last, was what it was) had consumed me so completely that nothing remained with which to make art. But my hands remembered. My hands remembered what they could do and what they were intended for. My life had a purpose beyond mere survival, and this purpose had been inscribed in my body. I rushed to the studio every day, where I filled sheet after sheet of plain newsprint. Several of us adjourned to a café after class with blank books, where we continued to draw, using each other as models and when possible, using the other patrons, too.

The blank book I had brought from home was quickly filled, and I set out for the art supply store near the Academy. In Rome, even shopping for a simple sketchbook can feel like an indulgence. Never had I seen so much beautiful paper in one place! There were pads of all sizes too, and I decided on one with a rougher-than-average texture. I chose four new pencils as well. To make sure I could see the texture of the paper, I walked to the front of the store where light streamed through a pair of large windows. This caused the clerk to watch me carefully. He was a small man with well-oiled and carefully sculpted black hair, but his forehead began to gleam with perspiration. His collar was too tight and caused his neck to bulge over it. He wore a bow tie and vest and jacket and clasped his hands, waiting for me to choose a sketchpad or try to run from the store without paying. Artists had an unsavory reputation here, it seemed.

I held up the open pad and tilted it so the light brushed the surface. There were tiny shadows all across the page, which made it look like a miniature desert landscape. I turned to the waiting clerk and smiled.

“This one,” I said, and carefully counted out the heavy coins into his hand.

Mari Coates lives in San Francisco, where, before joining University of California Press as a senior editor, she was an arts writer and theater critic. Her regular column appeared in the SF Weekly with additional profiles and features appearing in the San Francisco Chronicle, East Bay Monthly, Advocate, and other news outlets. Her stories have been published in the literary journals HLLQ and Eclipse, and she is grateful for residencies at I-Park, Ragdale, and Hypatia-in-the-Woods, which allowed her to develop and complete The Pelton Papers. She holds degrees from Connecticut College and the Warren Wilson MFA Program for Writers.

One thought on “In Her Own Time: Mari Coates”