“Go Figure” is a regular feature at Bloom that highlights and celebrates the interdependence and integration of math and literature, and that will “chip away at the cult of youth that surrounds mathematical and scientific thinking.”  Read the inaugural feature here.

A beautiful geometric figure lies at the heart of A Madman Dreams of Turing Machines, Janna Levin’s 2006 debut novel featuring real-life mathematicians Kurt Gödel and Alan Turing. Her narrator reveals the shape in the first pages of the book: “This story will end where it began, in the middle. A triangle or a circle. A closed loop with three points” (3). However, neither simple shape—a triangle or a circle—captures the complex curvature that draws this story, constructed of factual biographical arcs interwoven with imaginative narrative twists. I take Levin’s circle or triangle as a clue, but I’ll offer up what I think is a more suitable figure at the end, after we’ve had an opportunity to explore the lives and work of the author’s protagonists, men “besotted with mathematics” (3), both incandescent in their insight, both doomed to tragic ends. 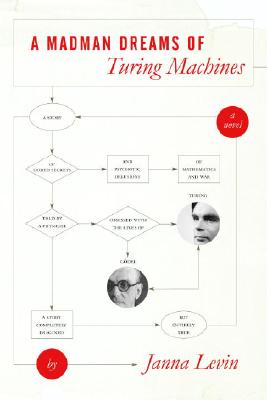 Kurt Gödel was obsessed with the Liar’s Paradox.

The liar says, “This statement is false.” We assume that whatever the liar says is a lie, therefore, the statement must be true. But the statement claims to be false. We are stuck with an unsolvable problem, an inability to ascertain the truthfulness of the statement. Twentieth century intellectuals dismissed the paradox as a problem with language—language is not sufficiently complete or nuanced enough to solve such contradictions. They believed that systems of logic and mathematics would eventually provide a decisive and unassailable proof of what is real and true, a perfect and pure knowledge, free of paradox. But Gödel proved that mathematics also suffers from the same incompleteness—there are mathematical truths that simply cannot be proven true.

Alan Turing believed that the human mind was a machine made by mathematics.

Our mathematical insights arise because we are manifestations of mathematical evolution. Turing’s own algorithmic insights helped the allies win World War II and qualified him as a founding father of modern computer science and encryption. Turing’s thought experiments with computational limits also challenged the idea that mathematics consists of concrete, computable answers—he posited that there are numbers that cannot be computed no matter how powerful the mind or machine.

We cannot know everything.

Levin has chosen these two brilliant men to be Madman’s fictional protagonists, but this is no creative mash-up of mathematical buddies out to change the world. The characters don’t interact in the story; instead, Levin devotes chapters to one or to the other, bouncing back and forth between separate lives that never overlap. In reality, Turing and Gödel moved in similar circles, even living in Princeton, New Jersey, at the same time, but they never met. In life and in art, they are twin hyperbolic curves, mirror manifestations of the same equation, but destined never to intersect. Yet, Levin builds connections between them through their shared curiosity about the reach of mathematical knowledge, their breakthrough contributions to modern thought, and the personal damage that defined each man’s destiny.

Janna Levin is a fascinating person in her own right: a theoretical physicist who teaches at Barnard College, she also serves as Director of Sciences for the interdisciplinary cultural community center Pioneer Works in New York City. At the near-blooming age of 39, Levin wrote Madman, an ambidextrous balance of hard fact and arch prose that integrates the lives of her strange and estranged protagonists through parallel story lines, shifting points of view, and past and present tense. Levin guides us with a doubt-ridden but earnest narrator who posits questions about what is real and true, prodding us to analyze her narrative in the same way Gödel and Turing question the holism of mathematics, and the very nature of truth.

Before we tackle the nature of truth, however, first I have to eat a bit of crow.

My first installment of Go Figure included a critique of David Auburn’s fictional mathematicians in his play, Proof. I found Auburn’s father-and-daughter geniuses one-dimensional and dull, each a cliché of the brilliant but broken mind, socially careless or inept, brimming with scientific insight but lacking in necessary humanity. I enjoyed skewering the stereotype, promising that real mathematicians were not pathologically selfish, demented, dorky, or mentally preoccupied to the point of madness.

Then I read Madman.

While the story is fiction, Levin’s content is drawn from Gödel’s and Turing’s letters, papers, and other biographical information. These two have done their part to prove that Auburn’s cliché has a kernel of truth: each man is scintillatingly brilliant, but socially outcast, with a perplexing mix of habits, beliefs, and behaviors that pitted him against the norms of his time.

Gödel was a self-absorbed hypochondriac, so terrified that someone was going to poison him he ate only food prepared by his wife, Adele. When she was hospitalized and unable to cook for and feed him, he literally allowed himself to starve to death like a paranoid Narcissus. Turing was incapable of filtering his authenticity for the sake of social convention or even his own safety. This naiveté probably contributed to his being brutally bullied in boarding school and his confession to a homosexual affair at a time when doing so meant prison or chemical castration. Turing chose the latter, and the effect of it drove him to suicide by cyanide poisoning.

Gödel and Turing developed coping mechanisms to deal with their personal demons and the uncertainty each discovered baked into the human experience. Gödel became more spiritual, even postulating that another world of pure mathematical thought existed alongside the real one and that he could gain access to it just by thinking about mathematical ideas. Turing let go of his religious convictions altogether, deciding that humans are complex computers executing intricate programs. In the only exchange in the novel in which Turing references Gödel, he describes his beliefs to his then-fiancée, Joan:

‘There is a pause as Joan internally tests her own atheism. “And if we are just executing programs, who did the programming?”

“Natural selection. Astronomical and chemical forces prodded the brain to mutate. We understand mathematics because we are created by forces that obey mathematics. That is why we can discover numbers and their relations, not because we perceive another reality—that’s what Gödel thinks. But because it is part of our programming.” And then he adds, “I am told Gödel is a little strange.”

This moment of reflection was another clue to the geometric figure underlying Levin’s novel. It is no simple Platonic shape, no stable triangle or perfect circle; her characters belie the very existence of either stability or perfection. She chose Gödel and Turing because they stand for something greater:

“Their genius is a testament to our own worth, an antidote to insignificance; and their bounteous flaws are luckless but seemingly natural complements, as though greatness can be doled out only with an equal measure of weakness.

These two people converge in history and diverge in belief. They act out lives that are only tangentially related and deaths that are written for each other, inverted reflections” (3).

I believe Levin is doing narratively what Gödel and Turing did mathematically—digging into the system and looking for alternate realities, emergent complexities, compelling uncertainties. If we do the same, we come to doubt that she is building a complete and holistic narrative system. We must step outside and look in from a new perspective to compute the story’s figural reality for ourselves.

I didn’t see a triangle or a circle as the narrator promised. But I did see a familiar closed loop with three points:

This hidden treasure, this figure-eight or infinity symbol, is called a lemniscate, derived from the Latin word lēmniscātus meaning “adorned with ribbons.” This particular form is a Bernoulli lemniscate, defined by Jakob Bernoulli, a 17th century Swiss mathematician and it is important because of its relation to another mathematical function—the rectangular hyperbola:

Here are Gödel and Turing—twin hyperbolic curves, mapped back to back and never touching. But between them is this sinuous, living curve, a perfect reflective form of connectedness and relationship. Three points along the x-axis define the lemniscate: the focus of each hyperbola and zero, the origin of the graph. (There is a fascinating technical description of this system on Wikipedia, along with a mesmerizing animated gif that clearly derives the relationship between the hyperbola and the lemniscate. It does a much better job than I possibly could.)

Like the lemniscate, Levin’s narrative pivots and slingshots around Turing’s and Gödel’s lives and work, flying close to asymptotic edges that vanish into oblivion only to swerve back and around to center again. We only see this beautiful, generative, recursive form when we look at the graph from a different perspective, when we look for a different relation between the curves.

Gödel said, “Mathematics is perfect. But, it is not complete. To see some truths, you must stand outside and look in” (91). He characterized it as “a glance” (89), a peering into the real world from another. Levin ends the novel with the same idea: “Craving an amulet, a jewel, a reason, a purpose, a truth. I can almost see it on the periphery, just where they said it would be, glistening at me from the far edges of every angle I search” (220).

As an amateur astronomer, I learned the trick of the “glance askance” to see faint stars in the night sky. Looking at them directly wipes out their detail, makes them fuzzy and indistinct. Looking just to the side, counterintuitively, brings the star into clearer focus. It takes a while to trust this peripheral gaze, to trust that what you are seeing is real and true, even though you can’t look directly at it. The legacy of Kurt Gödel and Alan Turing, and I believe Janna Levin as well, is that it is real and true because you can’t.

Susan Sechrist is a freelance technical writer and PhD student at the University of British Columbia, striving to better integrate her creative and mathematical sides. She published her first short story, the mathematically-themed “A Desirable Middle,” both in Bloom and the Journal for Humanistic Mathematics.