Armando Lucas Correa grew up in Havana, established himself in Cuba as a journalist with a focus on the arts, and emigrated to the US in the 1990s. He is now editor of People Magazine en Español. Correa’s debut novel, The German Girl, is a fictional retelling of the passage of the S.S. St. Louis, which left Hamburg in 1939 filled with Jewish refugees fleeing Nazi persecution. Everyone on board had landing permits in Cuba, but the Cubans refused them entry. After being subsequently denied entry by both the US and Canada, the ship was forced to return to Europe, resulting in the murders of at least a quarter of it passengers, and untold suffering by many more. 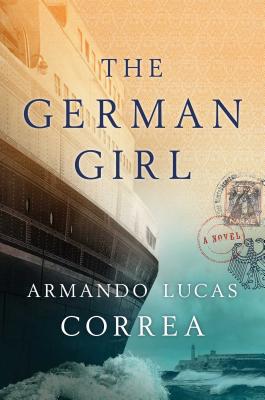 Correa brings a deep humanity to his work. The German Girl is narrated from the perspective of two young girls, Hannah and Anna, one in the 1930s and one in the present, each dealing with struggles that reflect the greatest humanitarian and political challenges of their day. Kirkus Review called the novel an “ambitious debut” spanning seventy-plus years “as two girls tell their gripping stories.” Publishers Weekly found Correa’s novel to be “a timely reminder of the plight of refugees, and the real consequences of denying them aid.” It was my privilege to interview Correa about the sources of his inspiration, and what drives his artistic vision.

Martha Anne Toll: Would you tell us a bit about your life in Cuba and how you came to emigrate?

Armando Lucas Correa: Mine was a matriarchal family. I grew up in Havana with my grandmother, mother, and sister in the Vedado neighborhood, in a house I used as a basis for the Cuban house in The German Girl. In college, I studied drama analysis and journalism and I began my professional career as a theater and dance critic. I was the editor of Tablas, an arts magazine. In the 1990s, I was invited to participate in a conference at Pratt Institute in New York, and stayed in the US.

MAT: How did you establish your journalism career here in the US?

ALC: I arrived in Miami in 1991 and started working as a freelancer at El Nuevo Herald, The Miami Herald’s Spanish-language sister publication. I worked for El Nuevo’s entertainment section. I also wrote various dance critiques. Eventually, I was hired full time as a reporter and covered it all: from elections, to politics to crime.

MAT: How did you come to writing fiction after a career in journalism?

ALC: I’ve always written, ever since I was a child. The first thing I ever published—other than essays—was a play, “Final Exam,” that won an award in Havana. I then started working on a novel about 1980s Cuba that I will never publish. It’s about a group of young people wandering around an imaginary Havana. It was more of an experiment, to play with language. I haven’t re-read it since I put it away almost twenty years ago. Years later, an editor for Rayo/Harper Collins approached me and asked me to write about how I became a father via surrogacy. That book was called In Search of Emma [En Busca de Emma]. Johanna Castillo, now my editor at Simon and Schuster, read the book in 2009. From the day it was published, we’ve been in talks about me writing a novel.

MAT: How did In Search of Emma inform your writing in The German Girl?

ALC: There are chapters that intertwine. There’s a dream that is repeated, almost like a leitmotif in both books. It’s a recurring dream where the protagonist finds himself in the middle of the ocean, lost, and finds himself back on an island.

MAT: Can you tell us how you learned about the story of the St. Louis, and why you decided to write about it?

ALC: My grandmother, the daughter of Spanish immigrants, was pregnant with my mom when the Saint Louis arrived in Havana. What happened there—and after they left the port of Havana—deeply impacted her, and she never tired of telling me throughout my childhood that for the next one hundred years Cuba would pay dearly for what it had done to the Jewish refugees.

MAT: Can you talk about your choice of using the voices of the two girls, Hannah and Anna, to tell the story? Were there specific challenges in writing from these perspectives?

ALC: My daughter Emma, who is the same age as Hannah and Anna, gave a voice to my novel. When I started writing it, she was a nine-year-old girl who was about to turn ten. My characters’ ages grew at the same rate that Emma grew in real life. I wanted the story’s drama to be told from the perspective of a young girl, in a young girl’s voice. It seemed more powerful to me that way. The main challenge was to make that tone credible. At times, I had to diminish the intensity so that despite the fact that Hannah lived in a turbulent time in history and Anna was living in the middle of a family crisis—making them more mature for their age—I didn’t want either to sound too adult. In any case, whoever knows my daughter Emma, knows she speaks like Anna and Hannah.

MAT: Do you feel there are issues or themes from the story recounted in The German Girl that are relevant in today’s world?

ALC: That was my objective. I wanted the tragedy of those refugees to read like a drama we are living today. I avoided direct references to Jews, Hitler, Fidel Castro. It’s sort of a fairy tale told by two girls who grew up in difficult times. I’ve just now received a video from a Congresswoman in Spain who cited The German Girl in Congress to reference the genocide in Aleppo.

MAT: 9/11 figures prominently in The German Girl. Can you talk about your decision to set that as a backdrop?

ALC: It’s a backdrop now, but in reality, when I started writing the novel it was front and center on the news. A man who leaves his house on a Tuesday never to return. A wife who begins to look into his past and there is the Saint Louis. The ship ended up being the spinal column for the story. But yes, I wanted to include September 11th, I wanted the Cuban parallels. I didn’t want the reader to think it was a story that happened years ago, one we were not responsible for today. Yes, we are all responsible. And we all tend to turn away from tragedies like the ones that are playing out right now in Syria.

MAT: You are the editor of People en Español. Could you tell us about your work at the magazine, and how what impact it has on other parts of your writing life?

ALC: My job as an editor consumes all of my time. Whatever free time I have is for my children. My job’s real impact isn’t so much on my writing time or style as it has on the time I need to spend marketing the book. Being an editor, I have a strong social media presence and a strong presence in different media, especially Spanish-language media. That has helped me promote the novel.

MAT: You write in Spanish; The German Girl was translated into English by Nick Caistor. Why did you make that decision and how did the process work for you?

ALC: I’m a Cuban writer who lives in New York, who writes in Spanish for the U.S. market. That’s one of the main differences between my novel and the translations that are published in the U.S. For example, when my editor buys a novel from a Spanish author, she ends up changing the book’s title and, in the majority of the cases, adapting certain elements for the U.S. market. My case is different. I worked directly with Nick, who is an excellent translator. When I conceived the title of the novel, even when I wrote its opening line, I wanted it to work in both languages. That’s how we handled all the translation work. What didn’t work in one language, I changed and vice versa.

MAT: Our readers are particularly interested in writers who publish their first books after age forty. Do you have advice for them?

ALC: The good thing about writing after forty is that there is maturity that comes through while you’re editing. When I look over texts I wrote in my twenties, they’re impulsive, pretentious. My advice is to be patient. You have to have a lot of patience. After forty, you also tend to listen more, and that helps.

MAT: How did you react to President Obama’s normalizing ties with Cuba?

ALC: I’m all about eliminating borders. Cuba will rapidly change the day it opens up to the world.

MAT: What’s your next writing project?

ALC: My obsession with the Saint Louis is just getting started. Or maybe it’s my preoccupation with our humanity, how at times it’s almost part of our DNA to reject others, those who think differently, those who believe in a different God, who have a different skin color or sexual preference, or simply speak with an accent. If I were to condense the story of The German Girl in a phrase, I would say the book is about the Saint Louis passengers who were allowed to disembark in Havana. My second novel, The Silence Between Us, will be about the passengers who ended up in France. The third will be about those who were never even allowed to board in the first place, the mischlings.