Writing a book together requires trust, honesty, and communication, like any other relationship. This month we bring to you five writing duos who bloomed together on their collaborative journey.

Annabelle Irwin and Lee Hadley, the women behind the pseudonym Hadley Irwin, were pioneers of the Young Adult novels. As described in The 100 Most Popular Young Adult Authors: Biographical Sketches and Bibliographies, they chose to focus on young adults because “[t]heir triumphs, their defeats, their joys, their sorrows, their frustrations, their accomplishments have intrinsic worth and extraordinary meaning, for they mirror the past, the present, and the future of us all.” Their books dealt with “distinctly adult themes” and garnered several accolades including ALA’s Best Young Adult Book Award in 1982 for What About Grandma? As for writing together, the two “genuinely like[d] and respect[ed] each other.” In their own words, “Writing together is a fascinating experience . . . [b]oth of our lives are filled with words . . . [i]n each other we have an instant editor . . . [b]est of all, when one of us would rather do almost anything . . . but confront the blank page . . . the other flicks the whip and the writing goes on.”

Michael Gregorio is the “shared skin” of literary thriller writers Daniela De Gregorio and Michael G. Jacob. Professors in their day jobs, the husband and wife team took to writing together when their individual works did not find any takers. While “it really is impossible to say at the end who wrote exactly what,” their writing responsibilities are clearly delineated: “Daniela is hot on dialogue, plot and intrigue, while [Michael is] more interested in settings, people and places.” In their own words, “We are very different writers, and we approach things differently, which leads to a great deal of lively discussion.” The couple’s efforts to “complement each other’s strengths” seems to be working. As per Kirkus Reviews the couple’s latest release, Cry Wolf, has “some deliciously dry humor and a lively, tough-minded plot.” 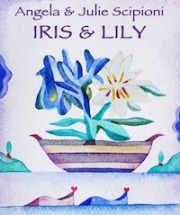 It took Angela Scipioni and Julie Scipioni four years of e-mailing back and forth across the Atlantic Ocean before they could publish Iris & Lily at age 55 and 53 respectively. The sisters found that in order to write together “they had to get past all the small talk and really get down to who [they] were as grown-up women.” The story, which is also about two sisters “who have always confided in each other about everything, except what really counts,” has, in the words of Vogue Italy, a “flowing narrative”—which, according to the Huffington Post, “will be talked about for a long time.” In order to bring authorial integrity to the project the authors had to, in their own words, “learn to deal with the overlapping of the fictional relationship of Iris and Lily with our relationship as sisters.”

Marina Budhos and Marc Aronson had both published separately before “they discovered that they each have sugar in their family backgrounds” and decided to write “a journey through time, telling the history of world economies, agriculture, slavery and more through the lens of sugar.” The book landed on several best-of lists and was nominated for 2012 YALSA Award for Excellence in Nonfiction for Young Adults. Like Michael Gregorio, the other husband-and-wife team on this list, Budhos and Aronson “butt[ed] heads a little” but were aware of their respective strengths and weaknesses. In Budhos’s words “I’m the fiction writer in the team, and Marc is the historian, and we realized there’s a way in which the merging of those two sensibilities can form a whole.”

This mother-daughter duo had to go through a heart-wrenching separation in order to come together as writers. Since Kathy was given up for adoption at birth, Julie and Kathy “had entire lives to recount.” Not wishing to meet as strangers they exchanged lengthy letters which “turn[ed] into chapters.” In their own words, “All we were doing was telling each other our stories, in an attempt to show each other who we were and what we’d done in all the years we’d been apart.” The “heartwarming dual autobiography,” in the words of Kirkus Reviews, has “[a] particular strength of the narrative [that] is the two distinct styles of writing; each author states her own point of view simply, without embellishment. The reunion is similarly understated, which makes the meeting even more poignant.”