Following is an excerpt from Judy Chicurel’s forthcoming novel If I Knew You Were Going To Be This Beautiful, I Never Would Have Let You Go, which will be released on October 30 by G.P. Putnam’s Sons.

those girls from the dunes

In seventh grade, they came to school in cashmere sweaters and silk stockings, wearing suede shoes from Bloomingdale’s in the city. Their clothes were never too big, their teeth never crooked; it was as though they lived at the orthodontist and their blinding smiles made you want to bloody their lips. They thought who the hell they were and seemed to exist only to make everyone else feel like shit. Because of them, junior high was brutal, a nightmare, and everything you’d ever believed to be good about yourself got erased, like you were starting life all over again in a gray swamp. “If I had to live those three years over again, I’d kill myself,” Liz said. “I’d kill somebody, that’s for sure.”

But in high school, everything changed. Those girls from the Dunes stopped shaving their legs and wearing bras. They stopped wearing makeup and, instead of cunning little outfits from Lord & Taylor, with sweaters and kneesocks that matched, they wore ragged jeans and flannel shirts in winter, and cutoffs and flip-flops in summer. They wore red and blue bandannas around their long, shiny hair. They smoked Kools instead of Marlboros and slept with boys, lots of boys, and everyone talked about it but nobody wrote their names on the bathroom wall at the bus station, like they did with Sheila Mooney, who lived in the Trunk and wore her mother’s leopard coat to school so that she looked 40 instead of 16. Nobody called them “cow” or “slut” except for us, and even with underarm hair hanging down to their knees, they still ruled the roost. Even when they spouted stupid shit like “Free Angela!” and “Power to the People!” and everyone else laughed scornfully, they held their heads high and believed in their words.

Those girls from the Dunes! We envied them, hated them, and wanted to be them, isn’t that always the way? It’s an old song, because those girls are everywhere, in every story, in every life; fairy-tale princesses living in castles waiting for the prince to come rescue them (and he always does), carried to school by six shining horses and a gilt-edged carriage, or their mothers’ Cadillac Coupe DeVilles. Prettier, brighter, lovelier than everyone else, or at least they think so, and they are never fearful of ridicule or laughter or life.

They tried to befriend us, and publicly we cursed them and threatened them in gym class, but at night when they called us, we’d take the phone into the bathroom or the linen closet and speak in whispers, as though talking to an illicit lover. We were jealous over who called whom, and then began fighting over their attention, and finally, because they’d been clever and we hadn’t suspected, we realized it was never us they wanted at all, but the boys, our freckled, blue-eyed, shaggy-haired boys, so different from what they were used to, those boys from the Dunes with their soft, pudgy hands, and their juvenile jokes and girlish giggles, who’d never quite lost their baby fat and wore braces well into their teens. Who were polite and respectful and predictably successful as student council presidents and honor roll students, but still their girls turned away, lowering their sights to strong-limbed boys who held after-school jobs instead of attending SAT prep classes and had to buy their own wheels during senior year instead of getting the keys to a Corvette convertible for their eighteenth birthdays. The boys we hung out with, Voodoo and Billy and Conor and them, made rude remarks and raspberries whenever they walked by, but their eyes followed those girls from the school bus windows as the bus pulled away from the curb. They secretly yearned to put their arms around them, to pin them against the brick wall in back of the high school gymnasium, where they could drop their eyes and stammer something that sounded like surrender. We were furious, enraged at those girls for seducing us into submission, then at our boys for defecting to the enemy, and, finally, at ourselves, for our own stupidity. “How did we not see this coming?” we asked one another in dismay. The answer was so simple it made us want to cry: we wanted to believe they liked us, that they wanted to be our friends.

Those girls from the Dunes! They were used to being the best, even when they weren’t, like the time Michele Apton got a D in Algebra and her mother came to school to talk to Miss Fland, who ended up changing Michele’s grade to a C+, not like when Gin O’Connor got a D in Home Ec and her father called her onto the enclosed porch and boomed so loud you could have heard him in New Jersey, “Dumb ass! Who the hell fails Home Ec? You better straighten up and fly right and stop embarrassing your mother.” When Connie Bescht stole Tommy Malone from Edie Cartwright, we all surrounded Edie in the smoking bathroom, saying comforting things like, “When we get through with her she’ll really be singing those bell-bottom blues.” But Edie begged us not to, not to do anything, please, please, it would only make things worse. “They’ll just start that ‘crazy girls from the Trunk’ shit again,” she said, her voice hoarse with smoke and tears. “Trying to make us look like animals next to them.” 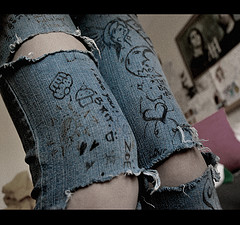 “Besides,” Edie said, blowing her nose, “Tommy’ll come back. He doesn’t know it yet, but he will.” And weeks later Tommy did, meekly following Edie through the halls to class, through the streets of the Trunk to her after-school babysitting job, until she finally turned around and shouted, “What?” And after she’d tortured him sufficiently and finally asked him what made him return (“though I should be asking what made you leave in the first place, asshole”), Tommy answered, “Because every time I kissed her, afterward I always ended up wanting to punch her in the face.”

And in their senior year, Tina Kravitz took Tootie Malloy away from Vera Maddox, and Tina was brazen about it, bold, stepping right up next to Vera in the smoking bathroom, running her hands through the long, golden tresses that Tootie seemed so crazy about compared to Vera’s kinky red mess, like a devil’s halo around her head. Everyone expected Vera to flip out, because she and Tootie had been together since ninth grade. But by then, Vera had an eye to the future; “No kid of mine’s going to end up a beer-drinking, glue-sniffing Trunker,” she would say, yanking a comb through her hair in front of the mirror, her cool green eyes shaded and knowing.

While everyone else sat in the back of Mrs. Doulin’s Bookkeeping class, making paper airplanes out of the weekly quizzes, Vera sailed through Merchandise Purchasing, earning an A for her efforts. Her steno and typing were so impeccable that she bypassed the traditional Katie Gibbs secretarial training and skipped school one day to ride the Long Island Rail Road into Manhattan and interview at one of the big insurance firms through a contact of her uncle’s. She secured a job as junior assistant to one of the vice presidents at a higher salary than anyone had ever heard of, slated to begin a week after graduation. “You should see this place,” she said excitedly, her face vibrant, her hair gathered in a knot at the nape of her neck that we thought made her look so sophisticated. “And the men! God, my new boss is so handsome, if he wasn’t married I’d be jumping his bones in the supply closet, which, by the way, is bigger than my whole freakin’ bedroom.” We laughed, and Tina Kravitz, standing nearby, smirked and kept playing with her hair, her tiny tits bouncing underneath her tee shirt as she flung herself this way and that. She and her friends were talking about some kind of game, tennis or something, and Tina said in a loud asking-for-trouble voice, “Sore losing, that’s all it was, end of story.” And then, smiling at herself in the mirror, she said, “I just love winning, man. I mean, when you get right down to it, what else is there in life?”

Vera turned toward her, her huge green eyes blazing, but then she turned back to her own reflection in the bathroom mirror and began rearranging the tendrils that had escaped from the knot at the nape of her neck. When we asked her later why she didn’t just deck Tina right there, she told us she was thinking of the wedding picture on the credenza at Tootie’s tiny shotgun house in the Trunk, of how beautiful Tootie’s mother and father had been at nineteen and twenty, and how now Mr. Malloy sat in front of the television, bleary and gut-blown, speaking only to bark orders at Tootie’s mother or yell at Tootie for taking his last beer.

“That depends,” she said finally, staring straight into Tina’s face. “On what you think you won.”

Years later, Vera would wake up next to her married boss in the one-bedroom apartment on East Sixty-eighth Street and walk over to the window where she could touch the tops of the lantana plants and sweet-potato vines, courtesy of the classy florist shop on the ground floor. She would stand there, naked, smoking a cigarette, listening to the church bells peal out over the neighborhood. The sound of the bells would remind her of St. Timothy’s and Sunday mornings in Elephant Beach, when her father would stop at Renzi’s Bakery and pick up crusty semolina rolls and jelly donuts for breakfast after mass; they never ate before, so that everyone could receive Communion. Vera couldn’t remember the last time she’d tasted the wafer, and now she only went to church for midnight mass on Christmas Eve, when she was home visiting her family.

Yet, that morning, for some reason, she thought of getting dressed and walking over to St. Michael’s Church and bringing back crumb cakes from the German bakery on Lexington Avenue, oranges from the grocery on the corner to make freshly squeezed juice in the tiny kitchen of the brownstone floor-through that her lover paid for. She looked over at the sleeping figure in the bed, wondering if he’d be able to stay for breakfast. She took a bottle of Shalimar from the dresser and idly sprayed her shoulders, the tops of her thighs, the nape of her neck. Then she lit another cigarette and turned her gaze outward, thinking of the things she’d left behind, the things she’d escaped to get here, to this window, on this street, in this life.

Judy Chicurel’s writing has appeared in national and regional publications, including The New York Times, Newsday, and Granta. Her plays have been performed in NYC theaters and festivals, including the NYC International Fringe Festival, New Perspectives Theatre and Metropolitan Playhouse. She is a member of the New York Writers Coalition, and was a 2011 Fellow in the CUNY Graduate Center Writers Institute Fiction Writing Program.

2 thoughts on “An Excerpt from Judy Chicurel’s If I Knew You Were Going To Be This Beautiful, I Never Would Have Let You Go”