As Jon Clinch ably demonstrated in Monday’s feature piece, when it came to his own work Mark Twain was a skillful and agile writer. As it turns out, he was also a generous champion of his fellow writers.

One of the classics of American literature was written in less than a year by a man who was in his early sixties, dying of cancer, and had never written a book before. The Personal Memoirs of U.S. Grant covers one of the crucial periods in American history with candor, honesty, and a sense of mission: first, he had to make enough money to leave an inheritance for his wife; second, he had to do justice to the men who fought under him and the men who fought against him.

Having written so little other than personal letters, military orders, and a few presidential statements first drafted by staffers, the notion of becoming a “writer” in his seventh decade had to represent a challenge for Grant.

And yet he had a natural, firm, terse style, a total command of his subject, and a sense of proportion and modesty that enabled him to address eloquently the major experiences of his life. According to his memoirs, these were not his two terms as president, nor the corruption scandal that ended them: he just left the presidency out. He wasn’t a politician and he knew it. Grant was a soldier; he had a mind for terrain, provisions, organizing attacks and defenses, commanding men, and persisting in the face of seemingly endless carnage.

The great war books begin with the The Iliad—the goriest book I’ve ever read, including Thucydides’ History of the Peloponnesian War. Julius Caesar’s spare accounts of his triumphs as general barely count in such company; despite being written in part to advance Caesar’s political aspirations, they lack feeling and the kind of incident and detail that make Grant’s memoirs such a powerful testament to the uncertainties, disappointments, and outright horrors of war.

After leaving The White House, Grant needed money. He was approached to write some stories about his war experiences, received an offer from a publisher for an entire book, and then another publisher, none other than Samuel Clemens, made him a much better offer, financially speaking.

Some say Clemens even wrote Grant’s memoirs. Not true. The plain style of the American West, yes, you can find that in both Samuel Clemens and U.S. Grant, but no one other than a general could march this tale of war down one page and up another the same way Grant marched entire armies on the fields of battle.

Aided by his son as chief researcher, Grant carefully summoned the massive intricacies of a wildfire war and recorded them with understated but powerful effect. For its intimacy, here is one of my favorite passages (Grant is embroiled in the Battles of Chattanooga and Lookout Mountain):

After we had secured the opening of a line over which to bring our supplies to the army, I made a personal inspection to see the situation of the pickets of the two armies. . . . As I would be under short range fire and in an open country, I took nobody with me, except, I believe, a bugler, who stayed some distance to the rear. I rode from our right around to our left. When I came to the camp of the picket guard of our side, I heard the call, ‘Turn out the guard for the commanding general.’ I replied, ‘Never mind the guard,’ and they were dismissed and went back to their tents. Just back of these and about equally distant from the creek were the guards of the Confederate pickets. The sentinel on their post called out in like manner, ‘Turn out the guard for the commanding general,’ and, I believe, added, ‘General Grant.’ Their line in a moment front-faced to the north, facing me, and gave a salute, which I returned. 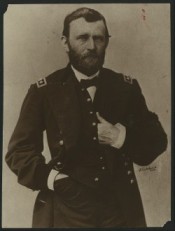 Imagine Grant’s courage, on the one hand, and the respect accorded him on the other. Such civil contact, preceded and followed by bloody rounds of savagery.

Grant doesn’t dwell on the savagery, but he does address the cause and purpose of the war:

There was no time during the rebellion when I did not think, and often say, that the South was more to be benefited by its defeat than the North. The latter had the people, the institutions, and the territory to make a great and prosperous nation. The former was burdened with an institution abhorrent to all civilized people not brought up under it . . .

So he knew why he was fighting, and Lincoln knew that Grant was his man. The two got along by Lincoln saying, in effect, I don’t know anything about war, but here are my ideas, and Grant saying in reply, You don’t know anything about war, so this is what I’m going to do. Writing to Grant after the Union’s victory at Vicksburg, Lincoln admitted he’d had his doubts about Grant’s strategy, but “I now wish to make the personal acknowledgement that you were right, and I was wrong.”

They made a stout pair.

Grant battered the South from the North and the West. He was actually surprised on the day of Lee’s surrender. As he writes, he was wearing a private’s blouse with his general’s bars on the shoulders, whereas Lee was wearing a new uniform and bearing a handsome, ceremonial sword. Grant had no sword. Nor did he have a staffer to write the terms of surrender:

When I put my pen to the paper I did not know the first word that I should make use of in writing the terms. I only knew what was in my mind, and I wished to express it clearly, so that there could be no mistaking it.

So that there could be no mistaking it . . . This is the phrase that rings loudest to me. At Appomattox, and again in his memoirs many years later, Grant understood the imperative of clarity. How could he become such a fine writer when he’d written so little beforehand? I think the answer lies in a truth about writing: writing is thinking. You can’t write well if you can’t think well. Gore Vidal commented that exposure to Grant’s memoirs inevitably caused one to recognize his intelligence. Edmund Wilson, one of the best prose stylists of the 20th century, who also wrote a book about the Civil War (Patriotic Gore), effectively said the same thing:

Grant’s Memoirs are a unique expression of the national character… The book conveys Grant’s dynamic force and the definitiveness of his personality. Perhaps never has a book so objective in form seemed so personal in every line.

The role of Samuel Clemens in stimulating and supporting Grant’s memoirs is worth expanding on. Here was perhaps the originator of “American” English, world famous as the author of The Adventures of Huckleberry Finn and Tom Sawyer, but also known as a poor businessman, as was Grant. Perhaps Clemens’s most costly business venture was his huge, unproductive investment in the Paige automatic typesetting machine, a spectacular flop. Yet Clemens understood the importance of Grant’s memoirs and marketed them brilliantly, engaging former Yankee soldiers to peddle them door to door, the way Bibles were sold. As a consequence, Grant’s widow, who lost Grant one week after he finished correcting the book’s proofs, profited to the tune of a half million dollars, roughly equivalent to nine million dollars today.

Willpower, need, and unaffected genius made a great writer out of a man who died a little bit more with every page he wrote . . . and yet still lives on by virtue of his brilliant account of a brutal and bloody war that emancipated the enslaved and kept the nation whole.

Robert Earle’s short stories have appeared in dozens of literary magazines, both print and online. This fall and winter The Piker Press serialized his novellas, “Thank You, No. We’re Well” and “A Train Trip to Murder on Strawberry Point.” His most recent novel is The Man Clothed in Linen. The Naval Institute Press published his account of a year in Iraq, Nights in the Pink Motel, in September 2008. DayBue Press published The Way Home, his first novel, in 2004. His latest collection of reviews of contemporary and classic writing, Tuppence Reviews, is available on Kindle.